The people you choose to help build your business will be the key to its success — or its failure.

A report by Michael Roach and Henry Sauermann looked at startups to identify what systems and practices helped them succeed. During their research, Roach and Sauermann discovered that ‘joiners’ — team members other than the original founders of a business — were crucial to the success of the business.

Imagine if Sheryl Sandburg hadn’t met Mark Zuckerberg at a Christmas party — how different would Facebook look now? Imagine the team from PayPal hadn’t enjoyed working together so much — we wouldn’t have YouTube!

So yes, your team is important. But once you’ve got all the best people around you, how do you enable them to share in the success of what you build together? How do you encourage commitment and motivation to give their best?

One well established strategy is to reward your team with shares in the business. Statistics released by HMRC show an increase in the number of companies taking up HMRC-approved employee share schemes, the most popular being the EMI (Enterprise Management Incentive) option scheme. Why? Well, it offers great tax benefits to employers and employees, and in a time when every penny counts that’s a powerful inducement.

But of course there’s more to it than that? Money clearly helps pay the bills and no one would say no to a pay rise or bonus, but could owning a part of the business have more value than a financial reward?

UK department store John Lewis became famous in the 1920s when Spedan Lewis (son of the original John) decided to distribute preference shares in the Peter Jones store to staff. After a rocky start, in 1929 Spedan Lewis created the John Lewis Partnership Limited (containing the Oxford Street and Peter Jones stores). Profits from these combined businesses were distributed to employees either as cash or as fixed-interest stock in the new company. 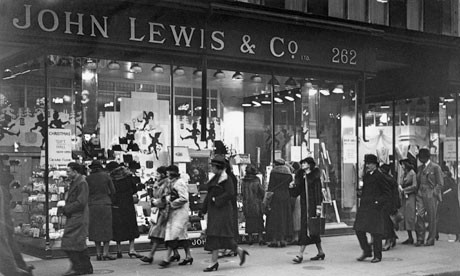 Why did Spedan Lewis decide to take this revolutionary (as it was back then) step? Simple — when he took over the Peter Jones store in 1914 it was failing. He realised it was due to unhappy and unmotivated employees and the share scheme was just one of the changes he made to improve the conditions. A century later and all 88,900 staff members are partners who own 48 shops, 353 Waitrose supermarkets, an online and catalogue business, a production unit and a farm.

Was it all down to the shares?

Spedan Lewis might have paved the way for employee ownership 100 years ago as an experimental way to improve motivation, but now we’ve had time to do a bit more research. The National Centre for Employee Ownership produces many reports and articles into the whats, whys and wherefores of employee owned businesses. One such article reports that

Employee ownership may have positive effects if employees value ownership in itself or perceive that it brings greater income, job security or control over jobs and the workplace.

Notice the word ‘may’ — so if you’re going to do it you need to do it well. But the same could be argued for any employee-motivation scheme — it’s important to remember that not all employees are going to be incentivised by the same thing.

Another report that sought to dig a bit deeper into share schemes specifically was conducted in by Equinity. In the report, 72% of the 18 to 24-year-olds interviewed said they would change their attitude if they had a share scheme at work. Of that 72%…

Why isn’t everyone doing it?

So, if there are such clear benefits and the John Lewis we know and love today owes its success to the act of distributing equity to employees, why aren’t all companies jumping on the bandwagon?

Simply, up until now distributing equity to your team has been complicated, costly and time-consuming. We’ve outlined some of the options below.

Any business can just issue shares to its employees. This costs little, but can be quite a hassle to do, especially if there are a lot of employees. More importantly, if you issue normal shares, they will immediately be seen as a benefit in kind, so will have an income tax implication for those receiving. Finally, once issued, the employee can just choose to leave, so no lock in is achieved.

EMI shares offer great tax benefits for you and your team and achieve lock in. However, setting it up could involve costly meetings with your accountant and lawyer due to the complexity involved. With any unapproved options you can choose a system that suits you, but once again you’re meeting with tax and legal experts to figure it all out much more frequently than you’d choose.

The final option is an equity distribution platform. That’s what Vestd is. Find out how you can reward your employees with equity in a way that’s simple, quick, safe and cost-effective.

Equity is the key to collaborating with the best – Vestd blog

Striding ahead: from side project to successful business – Vestd blog