More companies than ever are operating a tax-advantaged Employee Share Scheme (ESS), 15,340, to be specific, in the tax year ending 2020. Up 6% from the previous year.

Approved by HMRC, EMI is an employee share option scheme offering huge tax advantages for both employer and employee. It's an option scheme designed to help eligible UK-based SMEs:

As the Government states, the EMI scheme is an “attractive means of remuneration”. The report also highlighted other positives...

Employees who were recipients of shares under the four tax-advantaged schemes benefited from more than half a billion pounds of tax relief in the tax year ending 2020. EMI accounted for the largest chunk of this relief.

There’s no tax to be paid when granting EMI options. Recipients do pay Capital Gains Tax on any gains after they cash in but at a lower rate. Though, shares must not be sold within 24 months of the option grant.

Eligibility for EMI schemes is restricted and so fewer employees utilise them than other schemes. However, each employee can be granted options up to £250,000 in value, which is higher than the other schemes allow.

EMI has the largest total and average relievable gain per employee compared to CSOP, SAYE and SIP. In other words, each employee with EMI options is eligible for a greater amount of tax relief. 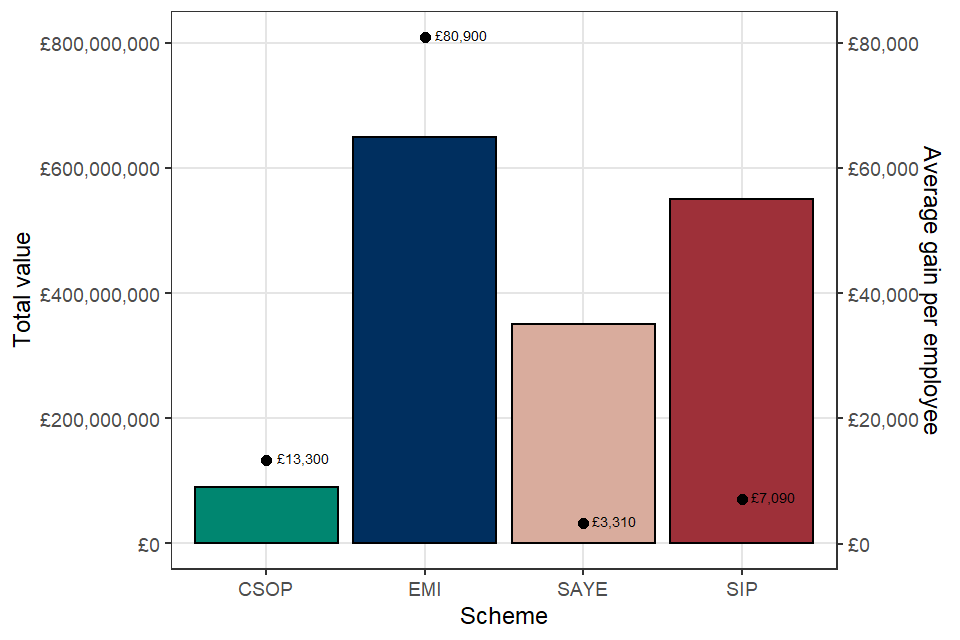 Interestingly, the number of employees exercising EMI options, though steadily rising, is significantly lower than those exercising SAYE options. For those who don’t know, exercising is when an employee converts their options into actual shares.

Perhaps there’s more work to do here to educate employees who have EMI options vesting. Companies should celebrate the launch of an employee share scheme as a means to reward the team. And provide educational materials to highlight the positives of the scheme.

On the other hand, EMI is specifically for UK SMEs and startups. Supposedly, 90% of all startups fail, so there will always be far fewer options exercised than granted. If a company ceases operating, employees can't exercise the options. It’s as simple as that. 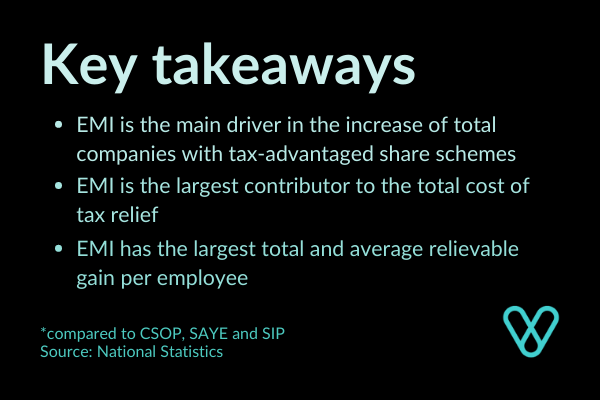 In response, we compiled (what’s believed to be) one of the biggest caches of data on the subject in UK history and submitted it as evidence. Data derived from over 5,000 sources, including our customers.

In doing so, we highlighted the benefits of the scheme and made recommendations in the hope that more UK SMEs can benefit from it in the future.

Inspired, we launched a campaign to spread the word. Because despite the increase in the number of companies operating an EMI scheme (as seen in the government’s latest report), plenty of eligible companies are missing out, unaware of the benefits. That’s why we’re campaigning for an #EMIrevolution.

Find out more about Enterprise Management Incentives and join our #EMIrevolution.

Operation post-pandemic: how to lead teams once again